This issue of Psychiatric Clinics, guest edited by Drs. Alan C. Swann and Gabriele Sani, is entitled Mixed Affective States: Beyond Current Boundaries. This issue is one of four each year selected by our series consulting editor, Dr. Harsh Trivedi......view more

Rating:
100% of 100
1  Review Add Your Review
Share this to get discount code
Your discount code here : #FB456
Add to Wish List
IN STOCK - This may take up to 5 business days to ship
Skip to the end of the images gallery 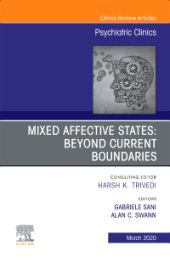 Edited by Alan C. Swann and Gabriele Sani
Product Details
Reviews 1
Write Your Own Review
Only registered users can write reviews. Please sign in or create an account