Volume 8 consists of Parts I and II. Part I considers theoretical perspectives in bridging developmental neuroscience with child psychology, with the role of neuroscience furthering our understanding of the child?s mental development, and a separ......view more

Be the first to review this product
Share this to get discount code
Your discount code here : #FB456
Add to Wish List
IN STOCK - This may take up to 5 business days to ship
Skip to the end of the images gallery 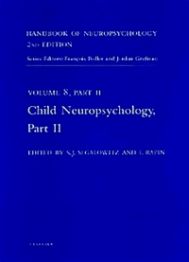 Skip to the beginning of the images gallery
Description
Volume 8 consists of Parts I and II. Part I considers theoretical perspectives in bridging developmental neuroscience with child psychology, with the role of neuroscience furthering our understanding of the child?s mental development, and a separate chapter outlines the importance of plasticity in this growth. Chapters also cover methodological issues arising from epidemiological perspectives and from psychometric concepts and issues. Methods for measuring biological brain function and structure and their particular application to child neuropsychological disorders are covered next, including ERP, PET, SPECT, MRI and fMRI technologies. Included is a chapter devoted to childhood seizure disorders. Separate chapters follow on neuropsychological assessment in infancy, in the preschool child, and in school-aged children. Following this are presentations on the development of motor control, including handedness, and somatosensory perception. Part II begins with chapters on visual development and on development in visually impaired children, followed by chapters on cognitive development in deaf children and on central auditory functions and their evaluation. This is followed by chapters on early language development and its neural correlates, developmental language disorders, and on acquired aphasia in childhood. Two chapters on dyslexia and another on dyscalculia follow. Next is a chapter on disorders of memory with a special focus on temporal lobe disease and autism, one on attention disorders, and one on executive functions in normal and abnormal development. Following this are chapters on the development of emotional regulation and on mechanisms and influences on addiction in children and adolescents. Final chapters include one on eating disorders, and another focussing on autism spectrum disorders.